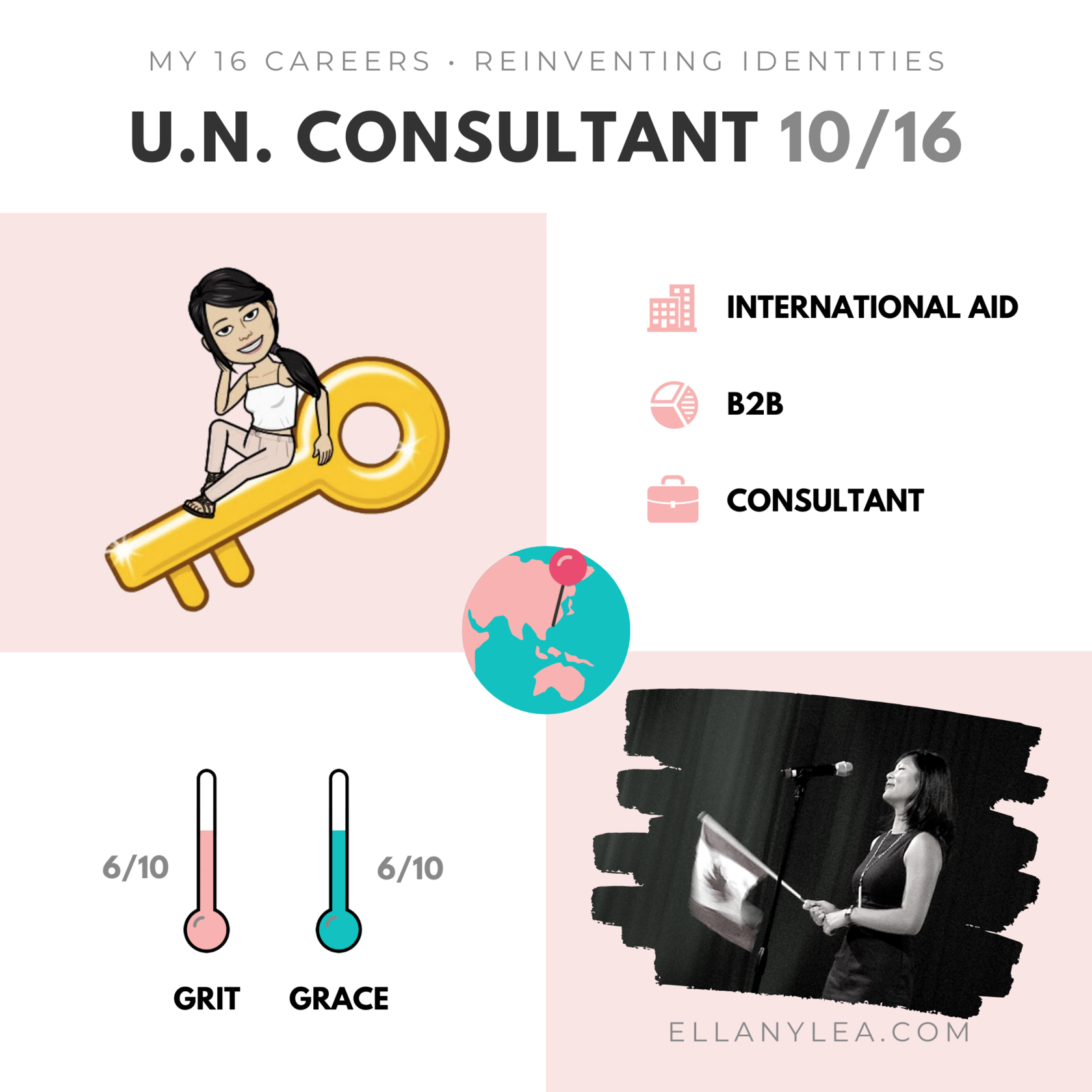 Having reached a glass ceiling on my previous career, I took a leap of faith and moved overseas to Asia, where I didn't have work or residency permit. Even though I spoke the local language fluently, I was not likely be hired and sponsored over local candidates. So I had to get creative.

I wasn't conscious of it at the time, but now I know for sure: living in a country where businesses are only taxed 10% ignited the entrepreneurial fire within me that I never knew existed. I had no business starting a business, but I asked myself what was the simplest thing I could, without having to start from scratch.

Given that all other aspects of my life were being jostled upside down, I focused career-wise on exactly what I was doing before, but as a consultant for several international organizations, rather than as an employee for one.

Painfully aware of my erratic career track record, I was struck by a lightning bolt of Inspiration one day to name my own consulting firm and place all previous careers under that umbrella. Treat all past work as clients. Because I said so.

Thanks to my newly reformatted consulting e-portfolio, the remote-work nature of consulting, and more importantly the existing global infrastructure of the United Nations, I began bidding for U.N. contracts.

More so, I could speak so succinctly and ultra kindly what was missing from their project specs in order to make their vision a huge success. There was an abundance of contracts to bid on, and it was simply a numbers game until one landed on my lap.

It definitely hadn't sunken in yet that I had broken free from the 9-to-5 shackles. It would take another year for me to actually rejoice that I was no longer an employee, at the mercy of my employer.

I was becoming a digital nomad and living the laptop lifestyle 2-3 years before those terms even existed. I was also making around $10,000-$40,000 per project, which required 1-4 months of work. And the work was with the United freakin' Nations, the Everest of the international aid world!!!

But I let it all go. One word: bureaucracy. So. Much. Bureaucracy. There were so many people in "high places" (and also all places) shufflin' about, accomplishing nothing. The deeper into the system I got, the more I witnessed abhorrent wastage of funds, resources, time, etc.

The UN was born from a great ideal, but by the time I experienced it, it had little to do with global human rights and advocacy. It was shadowed by executives flying first class, their children in private or boarding schools, with chauffeurs, cooks and a nanny per child, elaborate galas of which the funds never reached field projects.

I spent all my time waiting for my clients to have endless meetings in order to talk about the meetings they would have. Trying to move a project forward was like trying to roll molasses uphill on a frigid winter night.

In previous careers and volunteer roles, I'd been on the fundraising side, I know how hard it is. And even though these funds were landing in my pocket from UN agencies with good intentions, I felt like my consulting projects were ending up on the pile next to the shredder. It was heartbreaking.

I could sustain the career track, I was delivering beyond what the client asked for. But I couldn't bare to see my work not having much impact on individuals and their well-being. I was far too many layers removed from the beneficiaries. And yet, going back to career no. 8 to work in the field as an aid worker was not the solution.

Anger and confusion as to why I could not simply continue in this easy, lucrative, coveted, rightly earned, location-independent line of work, why, why, WHY?!?

Inner war between holding on to paid work (ie financial independence) and letting go until I found something more fulfilling (but ending up like my mom at the financial and emotional mercy of a man, which is just about my worst nightmare)

Isolation from moving overseas and having no friends nor social circles

Loneliness from missing my fun, passionate, and talented colleagues and friends, but frustration at knowing that I am the one who left

Resentment toward being a woman in a man's world, unable to have it all

Fear of scarcity and borderline madness that: this career was dreamier than the previous dream career, if I let this go there will be nothing left at the end-of-the-line

Precarious succumbing to decades of criticism and believing that "Yup, I think they're right, I am completely crazy and utterly wrong, just like they said."

Well that's a dumb move [to leave my glorious NYC life and career].

<insert scoff> There you go moving halfway around the world again. You really need to have your head checked by a doctor, you know. [The longer the critics have known me and the closer they are related by DNA, the more entitled they felt to judge and criticize. What a strange planet we live on...]

What are you up to again? When will you get a real job? [Dad's words of encouragement on my entrepreneurial debut. As if making $10,000 / month on average was a lame hobby or something.]

Stop worrying, honey, you're not leadership material anyway. [Mom's words of encouragement on my leadership debut]

When are you getting married? What is wrong with you? [Don't critics get tired of hearing themselves repeat the same things over and over without any change in outcome? Classic definition of insanity!]

Why haven't you pumped out 2.5 kids yet? What is wrong with you? [Don't critics get tired of hearing themselves repeat the same things over and over without any change in outcome? Classic definition of insanity!]

When I wanted to die after 2 years into my 4 year electrical engineering program, the only thing that kept me alive was social, philanthropic volunteer work outside of my studies. I never would have, or could have imagined that leading initiatives with the United Nations Millennium Development Goals would plant seeds for this career 7 years and 5 re-inventions later.

I also never imagined that I'd walk away from such a holy grail. I not only got my foot in the door of the UN, but got my entire body through the door. I was seriously starting to wonder if I was masochistic or a glutton for punishment...

When I reflect back on how I was struck by that lightning bolt of Inspiration to umbrella every career re-invention under my personal consulting firm, because I said so, I don't know where that inner sense of agency, authority and power came from.

My best guess is that when you are at the end of a rope, the Universe intervenes. Not to hand you a new rope (that would be too easy), but to provide the inspiration and empowerment for you to braid your own rope to hold on to, climb up or even swing from.

It would be another 2 years until I'd start to discover that the critics were not right. I was walking to the bus stop with a colleague, and she wanted to swing by the library to renew a book. I could have said, "Cool, bye, see you tomorrow!" but I didn't. I went with her to the library. While she was at the checkout counter, I randomly strolled the nearby aisles (though I know now there is no such thing as random).

Of all the books in the vicinity, there was one on the bottom row that was sticking out by a corner. Having a touch of OCD, I push the book back into alignment with the other book spines. Before my index had a chance to pull away, I saw the title, "Refuse to Chose" by Barbara Sher. The back cover quoted, "I could do anything if I only knew what that was."

Goosebumps arose. Hair on the back of my neck stood up. I grabbed the book, checked it out of the library, finished it in two days and sobbed for weeks. You mean to tell me that all this time, I was not wrong. I was simply a "scanner", aka as a multi-potentialite, polymath or hummingbird, someone with multiple talents, multiple passions, not meant to be caged into one single career. Whaaaaaat?!? No way. Really? I wish I had known that 30 years ago...

I am in awe (and emotional turbulence, of course) every moment of writing this series at how many invisible threads of different length, width, texture and color interweave to help me remember "Who am I?"

My greatest lesson and takeaway up until this point is: there is such a high price to pay to stay in integrity with my soul. And the reward is a deep intimacy and remembering of what the soul already knew: I am. The price is searingly painful to pay, but the reward is total liberation and freedom.

I've never had delusions of grandeur, but I did amass an empire of very satisfied clients because I used my clarity, creativity and stamina to we could move projects forward, in a world where completing ever task was like pulling a snail's teeth.

It'd be another 10 years before I fully comprehended the nature of our soul, which is to express itself organically, regardless of egoic control. Here, my soul expressed itself through the Sacred Brand Archetypes of Ruler (primary) and Artist (secondary). Both archetypes had appeared before but in different primary and secondary combination. Gosh, how many more combinations are there? Who knew?!? 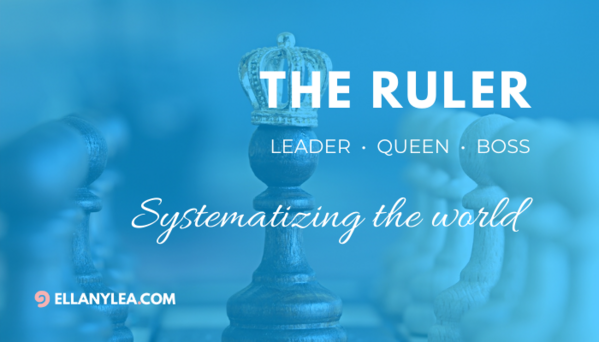 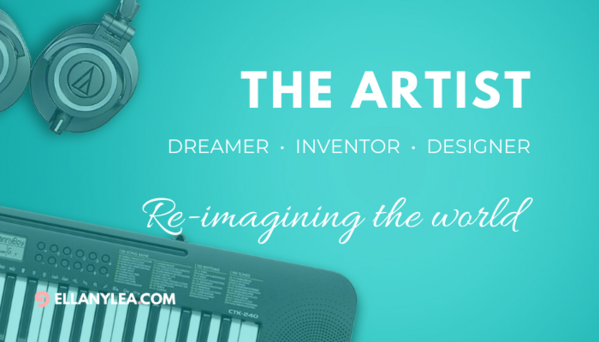