My 16 Careers • Reinventing Identities as a Psychotherapist (Part 15/16) I fell in love with Brené Brown after I watched her TEDx Talk on The Power of Vulnerability. When she flashed a photo at the end of her talk with the words "You are enough" written on a woman's collar, I burst into tears and couldn't stop crying for weeks. Weeks!

I even called a bestie asking her, "How do I turn this faucet off?!? I can't stop crying." She comforted me with such assured wisdom because she had gone through it too, "You can't. You just have to let this run its course." It would be 3 years and 2 months later that I'd be able to name what was going on.

Certainly people praised me for my external achievements, but no one had ever validated my internal being. No one had ever said, "You are enough." No one had granted me worth simply because I existed. My worth was pegged solely on how much I could achieve and how much money I could generate.

Brené Brown was the first to ever acknowledge my existence in itself having worth. I walked around in disbelief with my jaw dropped for week, "To be enough, is that even a real thing? Could it even be possible? What, in all that is holy, would that even feel like?" I had no idea.

So with every fibre of my being, I wanted to meet her and thank her in person for the revolution she created in my heart.

I browsed around the internet, but she wasn't scheduled for any talks or book tours. I don't know why, but two days later, I went back on her website and stumbled upon her The Daring Way certification program. I wasn't interested in another certification, god knows I had enough of those already. But as I skimmed the web page, I noticed that I met all the training pre-requisites. And besides, the training was sold out.

Another two days passed and I somehow found my way back to The Daring Way web page. Lo and behold, Brené had opened two more training cohort in the US and in Australia. My fingers took on a life of their own and clicked the registration button! Looking back, it's as if my soul swooped in, possessed all my senses and took over the steering of my life.

Three months later, at The Daring Way training itself, I'd learn directly from Brené Brown herself that:

What were the freakin' chances?!?

She also added that there'd only be 1,200 trained and certified Daring Way and Rising Strong facilitators on the entire planet. She wants to go deep with us, instead of go wide. That's 0.000016% of the population! What a privilege and responsibility.

So, I ended up trained and certified in psycho-educational-therapy. For the record, that was not in my plan... Maybe the Universe had bigger plans for me...?

I had always come from a peak performance, leadership, self-empowerment and coaching background. Now I was being expanded by inspiring colleagues with therapeutic backgrounds, who worked prisons, mental asylums, with horses, differently-abled children.

Their skills, gargantuan hearts, and psycho-therapeutic toolboxes wowed my pants off. And with time, with their love serving as a mirror, I could see those same talents in myself. They had always been there: I am a safe sanctuary within which we play and cultivate joy. I wasn't aware of that. I didn't know they were superpowers. I just assumed every human is like that. I have a theory that when it comes to our own greatness, we are often the last one to see it.

I already had the skills and the gargantuan heart. Now I enriched my training toolbox and was able to guide clients even deeper into the depths of their psyche, the holes in their heart, and the abyss of their soul, including the armpits of their shadow.

Then about midway through my certification, I developed the strangest ability to feel what my clients were feeling, but 2-3 days before they felt it. So by the time a client brought their raw heart to our table, they were intimately and intricately seen and understood. I could give succinct words to exactly what they were feeling and experiencing.

I never once needed to prepare for a therapeutic session. Everything we needed was all there, in the graceful moment. It was as if I was living and operating in another realm, another dimension, another planet! It was so cool, and strange, and mystical, and disturbing, and wondrous, all at once.

But I let it all go. Even though I invested $6,500 and 4.5 years of training, I needed so madly to stay true to myself. My soul's core essence was centered around creativity, empowerment and co-creation.

Healing is necessary. I have mega admiration and respect for therapists and healers. I have mega, mega gratitude for those who've helped me heal. But for me, as a clairscentient empath, becoming a therapist would be like working in a smokey bar and inhaling second hand PTSD all the time.

I know I would die young if I continued down that path. (I'm not being dramatic. I know. After 15 career re-inventions, each serving to sharpen my knowing, I know know. And I cannot and will not go against that knowing.)

Even though my essence is heal-ing, I didn't want to be a heal-er. But once you're (mostly) healed, then my clients can rent me as a co-founder or shenanigan partner and we can alchemize and co-create dreams you never even dreamed possible.

In my personal life, I also noticed a surge of energy vampires, narcissists, sociopaths and Peter Pan's (lost boys who don't want to grow up) appear in my life. Eek. No thanks.

So to back track a little, I didn't let it all go. I kept some tools and infused them into my coaching, empowerment and creativity work with my clients.

Worry of having my vulnerability used against me

Ultimate wrestling match with shame and I won. I finally won!!

We never know what you're up to. So we're giving up on you. [I wish they had given up on me at career no. 1, because then they would have given up projecting their fears, expectations and unrealized dreams onto me.]

(With terror in their eyes) How are you making any money?

(With disdain) WTF are you doing with your life?

I learned through this career re-invention that this training showed up in my life to guide me into the abyss of my own shadow. I don't think I would have gone there on my own, wrestled the alligator of shame and walked out alive. And even if I did enter the abyss, I would have lone wolfed it and created such suffering for myself.

But thanks to this certification program, I was held so tenderly by an amazing, inspiring and wise teacher Brené Brown herself, by a mega loving and expert trauma-informed supervisor, and by a community of souls who have all been to hell and back and who love the fiercest.

So even though my soul clicked the registration button, and lead us down this path, it doesn't mean I was meant to wear this cloak as a career identity forever (or at all). You would think I'd have learned this lesson at career re-invention no. 6 or 7.

Just because you can, doesn't mean you should.
– ELLANY LEA

Alas, nope. It took 15 career re-inventions, authentically living through the raw tumultuous experience itself, to finally embody the truth that: Just because you can, doesn't mean you should.

It was a revelation when I learned that my clients, who are badass founders and overachievers, came to me because I was their only safe place. I was a haven where they could put down the sky, take off their armor, shed their tears, and be renewed. They've always been the strong one, and now they finally have a place to breathe, rest, and be taken care of.

It'd be another 5 years before I fully comprehended the nature of our soul, which is to express itself organically, regardless of egoic control. Here, my soul expressed itself through the Sacred Brand Archetypes of Innocence (primary) and Maverick (secondary). Had it expressed itself through the combination of Innocent and Nurturer, I could see how I could have worn this career identity longer. But my Maverick, the rebel and liberator, wouldn't have any of it. It rose us to the next identity re-invention. Who knew that's how it'd all play out??!? 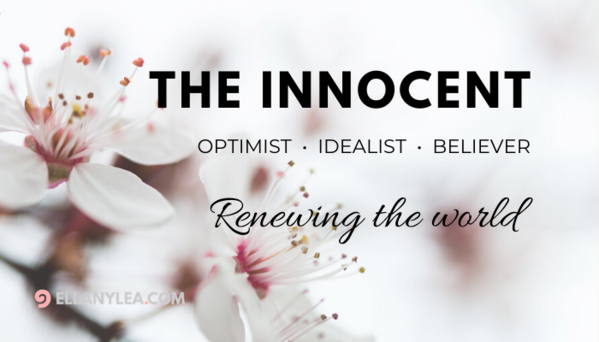