The Hero's Journey... for a Lifestyle Entrepreneur (Part 1)

Anytime you're about to do something new, different, or daring, whether you know it or not, you are embarking on a quest. Joseph Campbell coined this quest The Hero's Journey.

Whether you're growing a business, moving overseas, getting married or spiritually awakening, all quests have 8 stages in common: 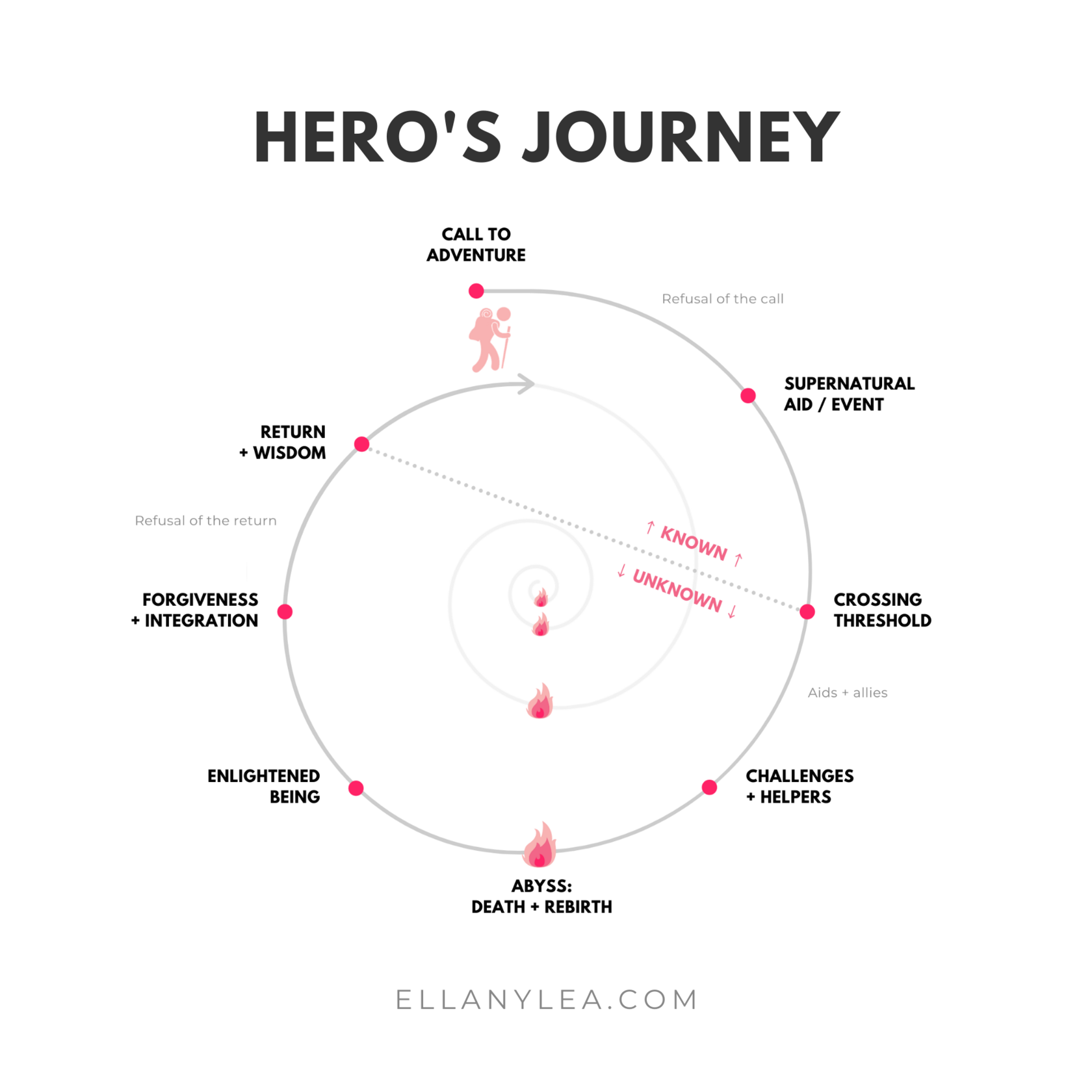 Let's use Dorothy in The Wizard of Oz as an example, in parallel with my own journey of spiritual and lifestyle freedom.

The Hero lives an ordinary life or their everyday normal. Dorothy is at her quiet family farm in Kansas. I was in my lovely Manhattan apartment in NYC, at the peak of my lucrative career with the United Nations.

Life was good, but deep down, we yearned for something more. Something that we couldn't put our finger on... Dorothy dreamed of adventure. I dreamed of fulfillment. Neither of us had any idea what was about to hit us.

In a woman, that yearning for more is our call to adventure.

At stage 2, The Hero is often reluctant or fearful to embark on this journey. In Dorothy's case, she could have left the farm anytime of her own free will, but she never did. She just sat there bored, longing for more. In my case, I could have left my six-figure (tax free!), international, humanitarian job, but why step outside the comfort zone that I had worked so hard for?

So a supernatural aid comes along to catapult The Hero onto the journey. A tornado hit Dorothy's family farm and transported her into a new realm, Oz. In Harry Potter, Hagrid swooped in on a flying motorbike to take Harry to Hogwarts to begin his training.

In my case, I got stood up on a date and declared "Oh hell no! That is the first and LAST time anyone stands me up!" and took myself on a date to a wellness convention, where coaching, freedompreneurship and my life's purpose found me. I didn't seek them out, they sought me out.

Stage 3 is where The Hero traverses the threshold from the known into the unknown. Dorothy lands in Oz and I land in entrepreneurship, both equally foreign and discombobulating.

In the unknown is where trials and tribulations begin, challenging everything we've ever known, leaving us clueless to the rules and dangers of this new realm.

On the bright side (because Life is kind that way), we are given a protective talisman that will somehow keep us safe and guide us home. Dorothy got a pair of ruby slippers. I got a shiny new MacbookAir. (Well, I paid for my Mac, but I never would have bought it had I not been inbued with The Hero's courage.)

At stage 4, The Hero has basically agreed to undergo transformation. And in order to survive the perils of the quest, The Hero encounters allies (mentors and angels) and enemies (dragons and demons).

For Dorothy, along the yellow brick road, she gathered her allies of: Scarecrow, Tinman and Lion. Together, they survived attacks by enemies such as flying monkeys, hypnagogic poppy flowers, and the Wicked Witch of the East herself.

At stage 5, The Hero reaches a crisis point after a roller coaster of trials, hopes, perils, wins, failures and almost-victories. The Hero now must "die" in order to be born anew. The only way out of the forest of transformation is through. Outdated paradigms, limiting beliefs, and false identities must be shed for The Hero's true self to emerge. Changing the outside (wardrobe, real estate, plastic surgery, etc.) becomes irrelevant, and changing the inside (inner peace, sovereignty and wholeness) becomes the name of the game.

Immediately after the peak tension of Death + Rebirth, at stage 6, The Hero lands on the other side of the abyss, out of danger, relieved, and even reborn, with higher awareness of one's own courage, power and strength.

Dorothy didn't just hide away as a poor, frail victim, waiting to be saved. She grabbed that bucket of water and dumped in good on the Wicked Witch of the East, thus saving herself, her friends and all of Oz.

The equivalent for me was to unsubscribe from and delete every single newsletter, pdf, audio, or video file ever produced by a 20-something white boy who knows NOTHING about women or spirituality. I chose grace instead. [I defined Grace as the convergence of ease, peace, joy, truth and trust.] I will not abuse myself nor my business the way patriarchy taught me to.

This surge of courage and decisiveness becomes The Hero's Enlightenment, a new way of being.

During stage 7, The Hero is confronted with one final obstacle that holds THE most power over them. It could be one's own ego, a parental figure or even a Universal evil.

The Hero must now call upon grace and mercy to absolve the ego, surrender the illusion or forgive "god". Then and only then does The Hero emerge "purified," with deeper awareness of their inner faith and the world's outer benevolence, both was there all along.

For me, I had clairscentience and digital wizardry all along. I had no idea how valuable the innate ability to know the truth and the skills to alchemize that truth into digital products were. I started the quest yearning for fulfillment, but it turns out my quest was to find wholeness within myself.

This alchemical process of forgiveness (ie atonement) and wholeness (ie integration) leads The Hero out of the unknown, because it is now know.

At stage 8, The Hero often struggles to return "home," the ordinary life they left behind. It's often so much easier to bask in the bliss of enlightenment and atonement, than to do the work of bringing wisdom back home to our people. The journey home can sometimes be as perilous as the original quest!

Given time and integration, The Hero does traverse back to the world they first left to share the wisdom and spiritual power gained from this quest. (Note: Society is often jealous of heroes who went away, but will eventually come knocking for wisdom.)

Dorothy returned home having reclaimed a brain, a heart and courage. She's no longer a damsel in distress, she's the hero of her own story. The wisdom of her quest is: you had in inside you all along.

As for me, I used my 8 years and $100,000 invested in healing arts and personal development to become a tuning fork for women founders, overachievers, entrepreneurs and freedom seekers, so that they reclaim THEIR way of doing business, success and freedom. The wisdom of my quest is: the best to do anything is YOUR way.

At this final stage, The Hero reaches inner and outer mastery of material and spiritual worlds. Such mastery leads to freedom from the fear of death, which is the same as the freedom to live. Truly live.

MORE THAN ONE HERO'S JOURNEYS

Do you recognize the stages of this quest in your own life's journey?

The most disturbing "aha" moment for me was to realize that we don't just have one Hero's Journey. We have multiple. Omg, so many! They never end, it seems! Some of my Hero's Journeys were: 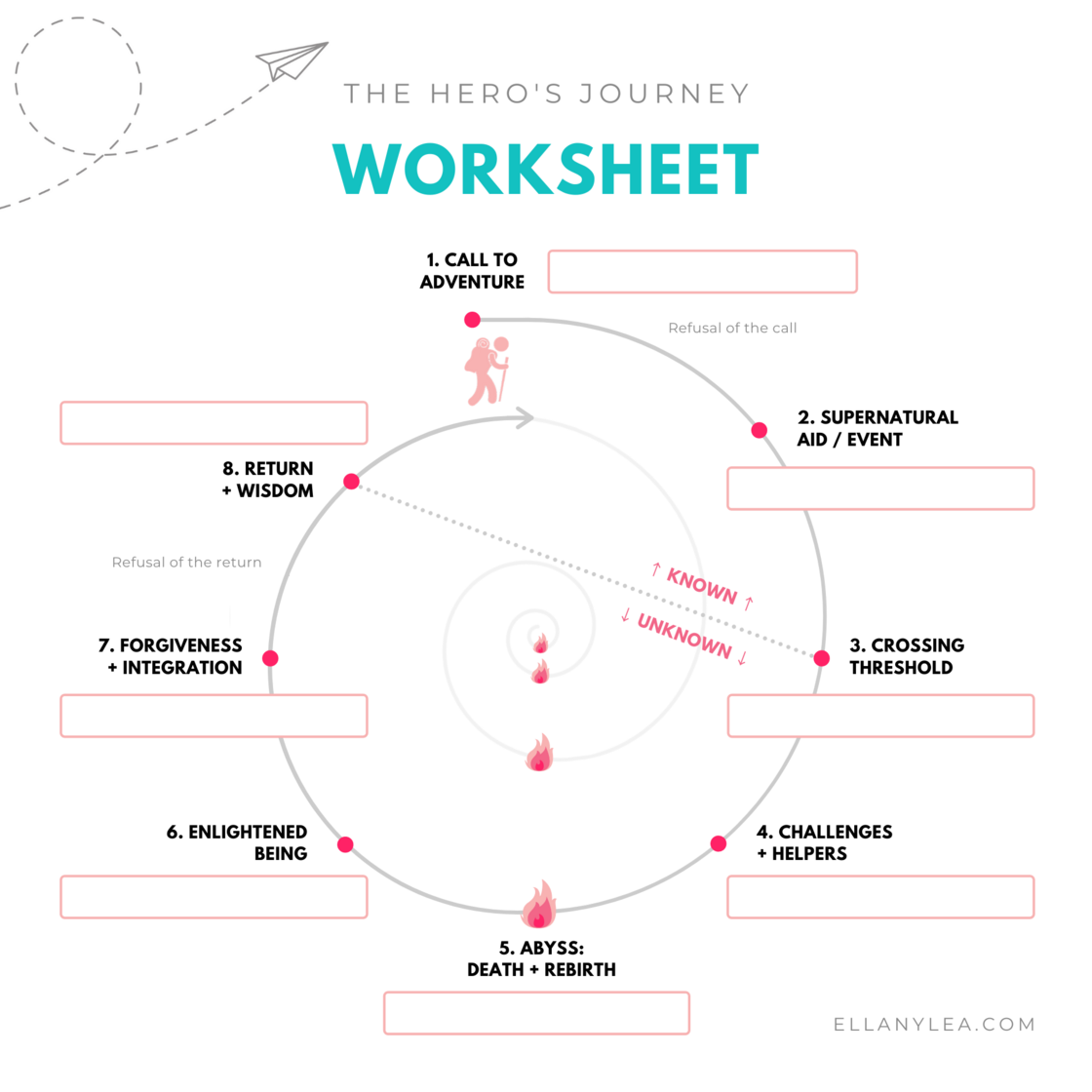