Power of Iterations • How I Unleashed my Genius Organically

There is faaaaaar too much hype around "Make $90,000 in 90 Days!", "Be Famous in Five Minutes!", "Six weeks to Six-figures!", or "11 Day E-course Challenge". I'm not saying that those claims don't work. I'm saying that it's not the full picture. I'm saying what they're not saying:

In business, there is such a desperate pursuit among the masses for an overnight sensation... which is normal. The ego wants what it wants (success, freedom, fame, peace, money, etc.), and it wants it YESTERDAY! An overnight sensation would also mean that the ego gets its desires fulfilled by bypassing all the often painful emotional, spiritual, mental, and physical growth necessary to have it.

Don't follow the masses. Often the 'm' is silent.

People don't like to share their process of becoming. They only share the highlight reel of what they've become. I love sharing the process of how to co-create sustainable and fulfilling success, through graceful iterations.

Any journey to success starts with knowing yourself, with co-creating the Master within. You could go round and round, running all the ad campaigns in the world or network until the cows tip over, but you won't create, keep and sustain success and freedom, without deeply and truthfully knowing yourself. 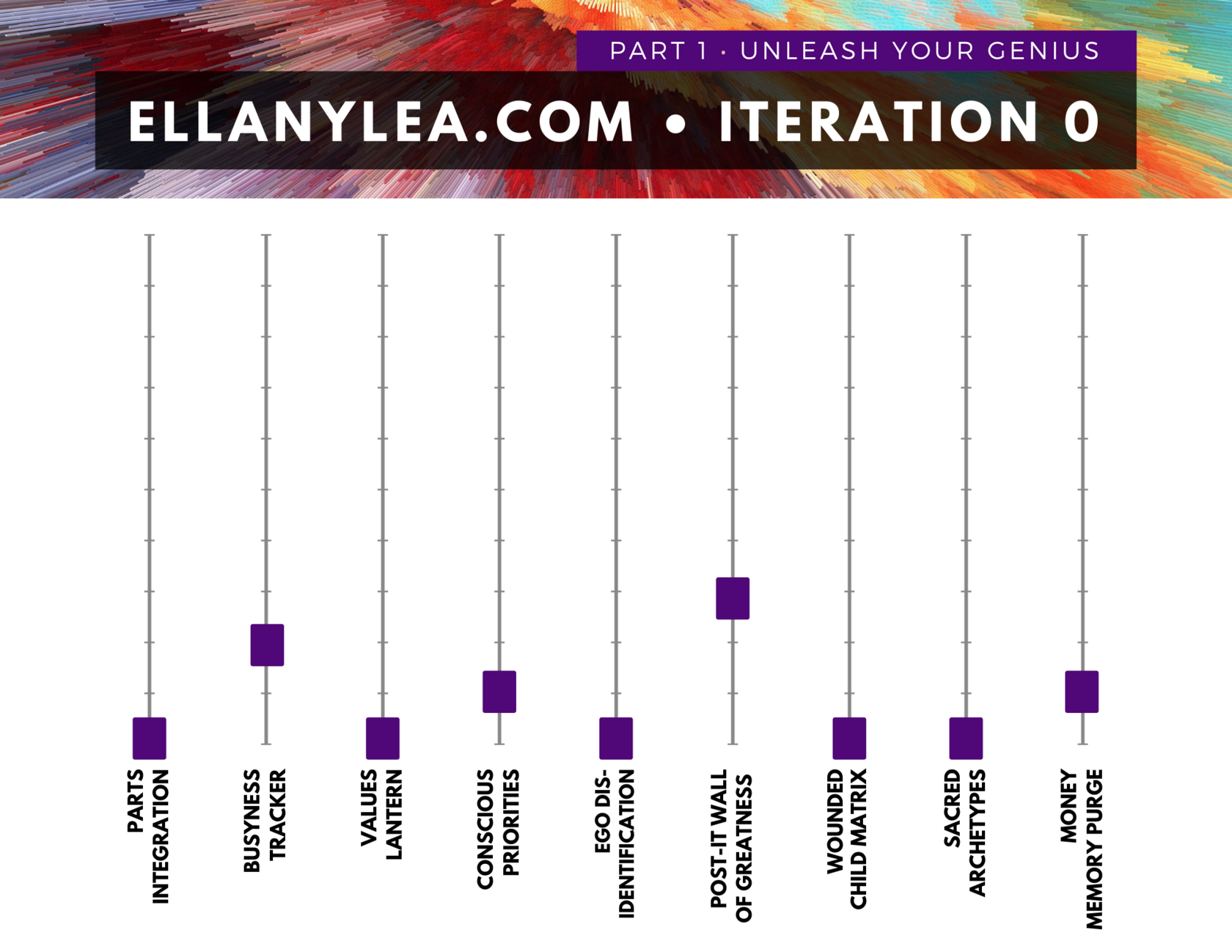 I was also very much shackled to the conditioning that my life purpose and priorities is to be everything, to everyone, all the time. Unfortunately, I know far too many women who can relate. Hadn't yet read Eckhart Tolle's A New Earth, so I wasn't aware of the mechanism of the ego, no less how to dis-identify from it (0/10). And I'd just gone through a baby spiritual awakening that affirmed that I didn't need to live in the financial scarcity and poverty that my parents lived in (1/10).

But the two things I did know and began implementing were time chunks (with conscious priorities 1/10) and celebrating wins (3/10). Hey, we all start where we start. We're all dealt the hand that we're dealt, but it's how you play the game that matters. Where are you starting from? Take the Freedompreneur Quotient Test to download your very own colorful Freedom Trackers. 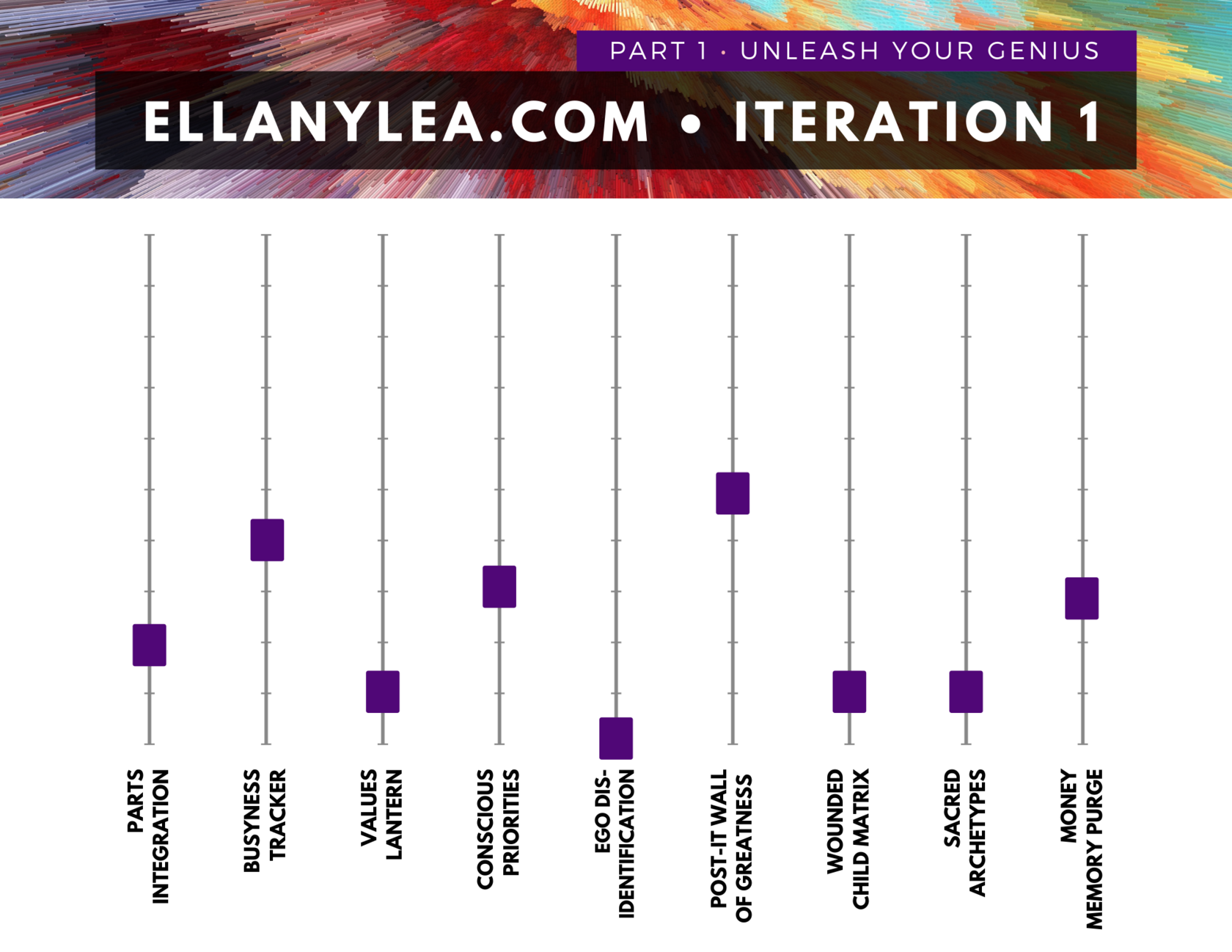 I often describe how becoming conscious of something is like placing an ice cube on the table to melt. You don't need to bash it with an ice pick or scorch it with a fire torch. Just leave it be. It'll melt effortlessly on it's own. There's nothing you need to do. Becoming aware was the work, and you already did it.

So when I became conscious of the inner work needed to Create the Master within, I dove right in and: 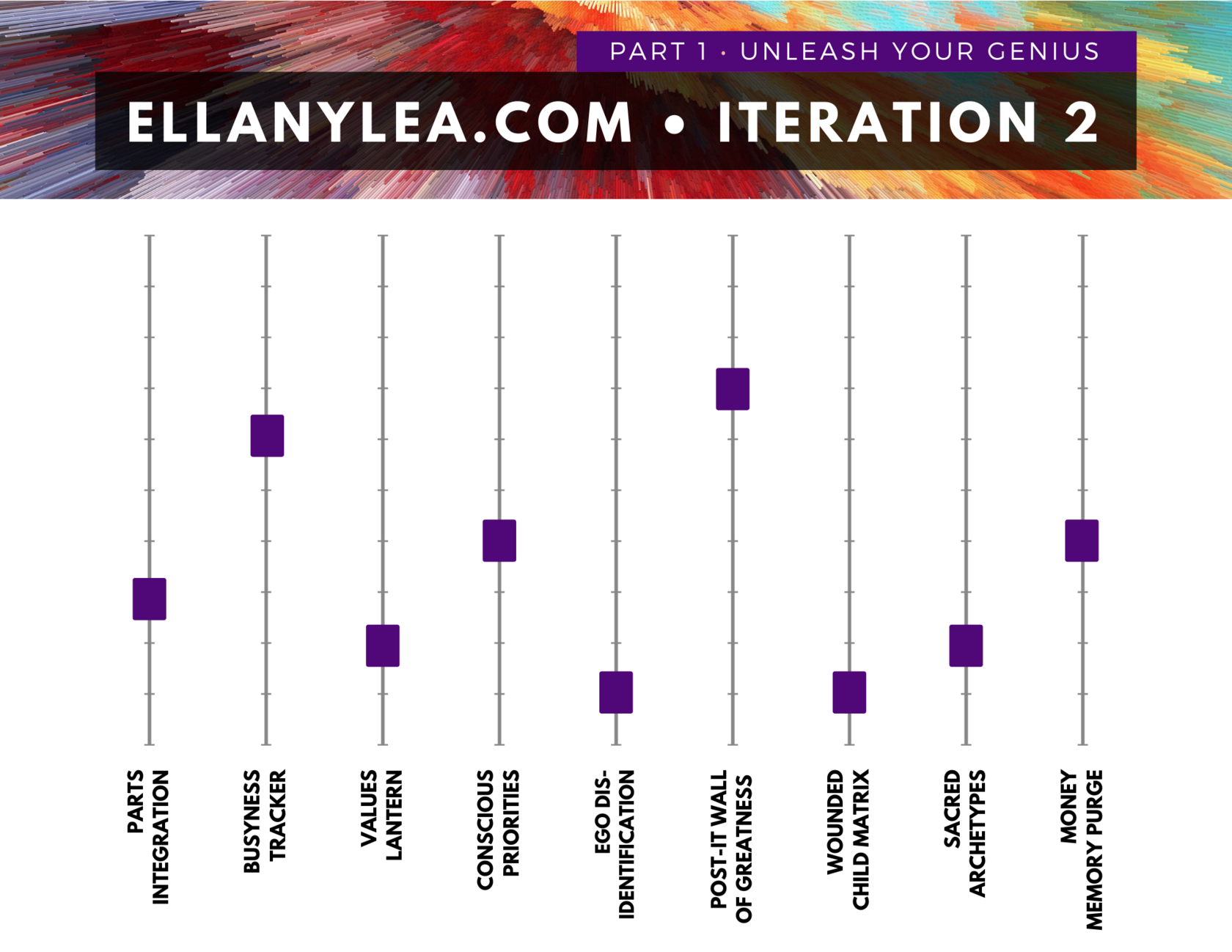 Ego Dis-identification (1/10.) By now, I had read A New Earth and it blew my mind, heart and soul wide open. And all my tuners on my Part 1 • Create the Master • Freedom Tracker were out of the gate! It felt like an eternity, like molasses rolling up Everest on a frigid winter day. But hey, forward it forward, right?

Values Lantern (3/10) & ​Conscious Priorities (4/10). I continued to free up my time as my top priority because it is my MOST valuable asset.

ITERATION NO. 3 • THE TIPPING POINT 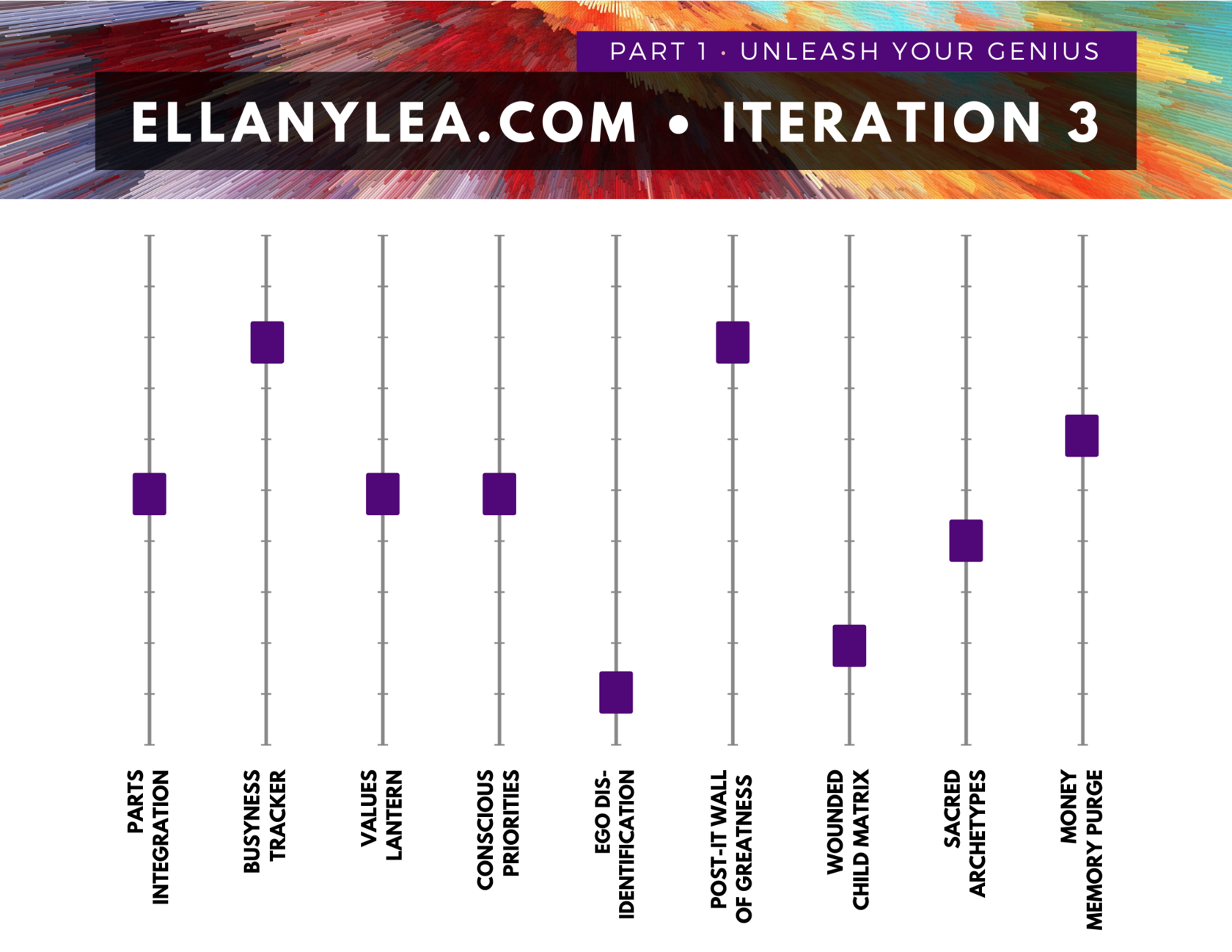 Sacred archetypes (4/10). In this iteration is where archetypes imbued my life from Jung's psychological archetypes, to Caroline Myss's Sacred Archetypes, Branding with Archetypes and Money Archetypes!

I've always known that the best way to learn is to teach, so I guiding my clients to meet their archetypes and that helped me get more intimate with my own parts and archetypes.

Values Lantern (5/10). It's also during this time that I got trained by my teacher Brené Brown, and received full permission to choose MY values (free from parental, cultural and patriarchal conditioning, including filial piety) and live them. This full permission also granted me the courage to hand out No's like a mofo or an ATM on the fritz spewing out $100 bank notes. The result: I freed up soooooo much of my time and filled my own cup before giving from my overflow.

It is also through Brené that I found my way to the work of Kristen Neff on self-compassion. Though there little to no traction on the Ego Dis-identification and Wounded Child front, I was at least gentle on myself, constantly reminding myself that I'm at least on the path.

Post-it Wall of Greatness (7/10) & Money Memory Purge (6/10). My clients continued to acknowledge themselves by making their Post-it Wall of Greatness (7/10) and burning their Negative Money Memory List (6/10) through our High Return on Happiness Masterclass. Courage is contagious. Purging is contagious. As my clients purged their money guilt or shame, I liberated them and they liberated me. Whaddya know, freedom is also contagious! 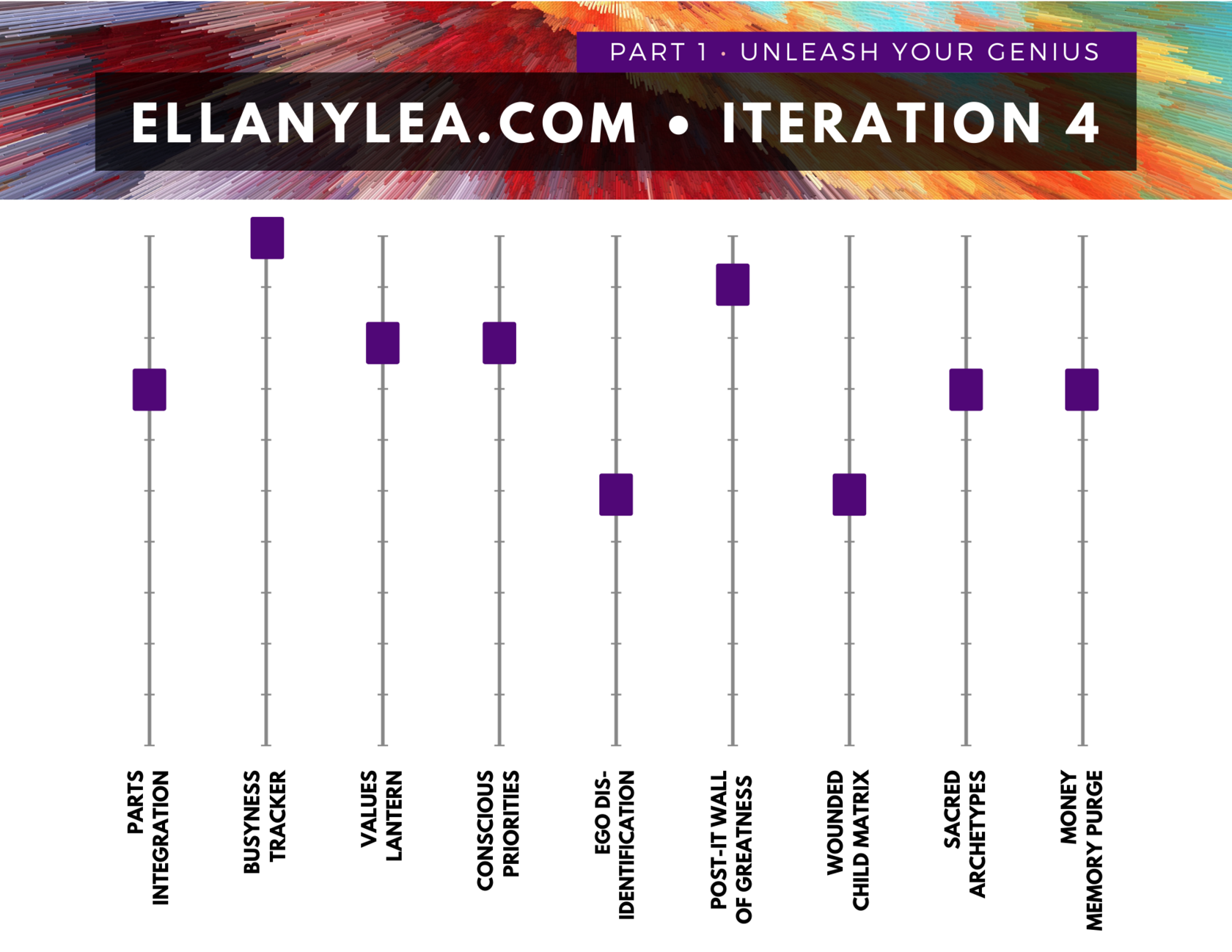 And then, tada! I saw the light at the end of the tunnel. I realized, at a visceral body level, that growth is not linear. It's twisty and winding and hella hard sometimes (or all the time), but it's also cumulative and exponential! There are tipping points after which everything you've ever been, done, read, learned or experienced converge and "Bam!" a big growth spur takes place.

My bestie Karen too a Neuroscience Certification and she helped me anchor the concept of "above the line" and "below the line." It took (what felt like) ages to get myself, my ego, all my parts, all my inner children, all my archetypes, the whole lot of 'em to above the line. It required not hard work or quantity of work, but enormous amounts of willingness, openness, dedication, and prayer.

And as a "Growth Spur" gift, the Universe sent me sociopathic goys and one jealous "queen bee" to cross my boundaries one FINAL time, for me to shoot up my time boundaries, values alignment, conscious priorities, greatness and sacredness through the roof!

Grace and mercy were my two bestfriends to release the heavy protective shells of ego, intergenerational trauma and scarcity, and as a result I became more whole.

The wounded children, I had 10 out of 12 of them. Ten! I thought I had 2-3 maybe 5. Ten! I knew that would take time. And I summoned my previously embodied practice of self-compassion to take the time it takes to maturate each of them within me.

Fill your own cup and give from your overflow. Only if you choose to. 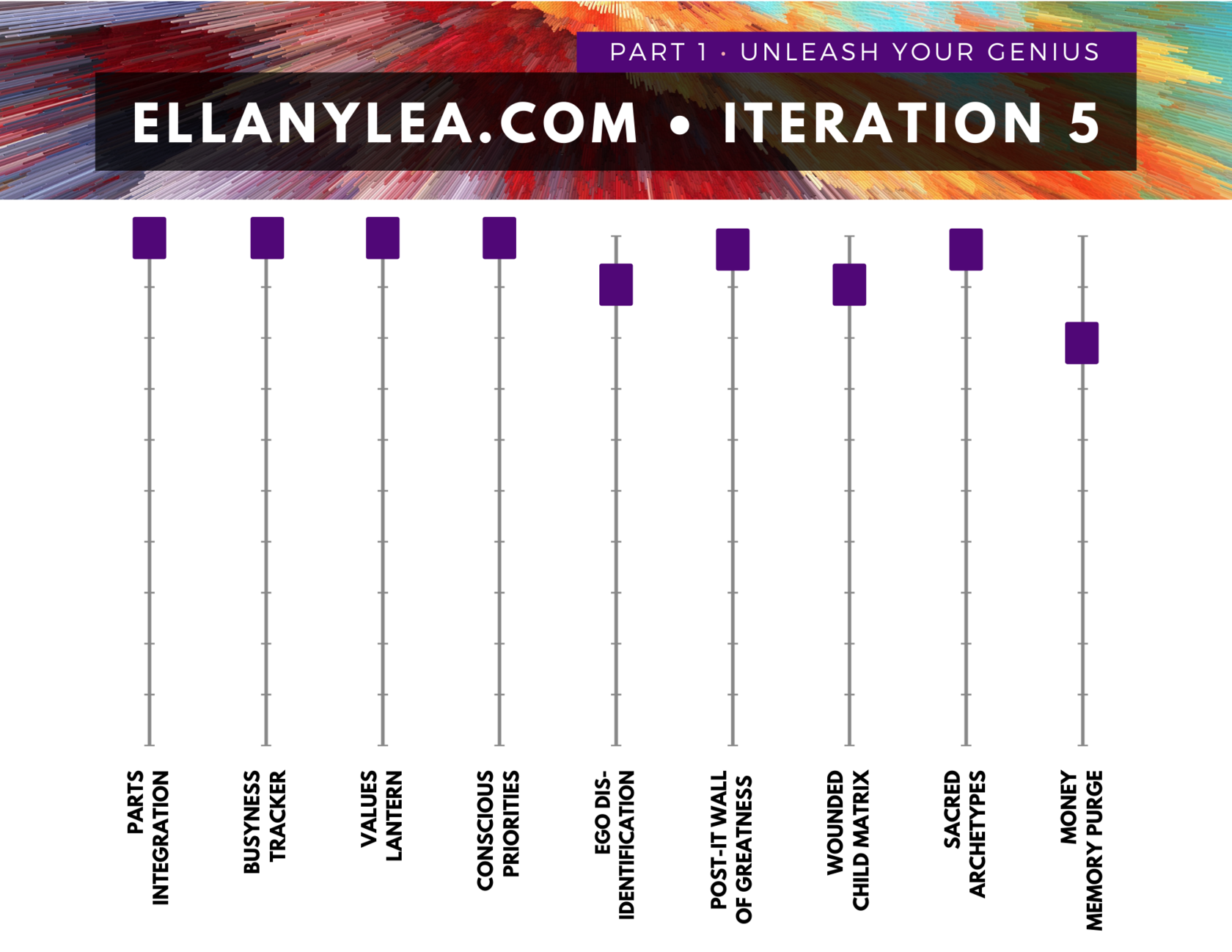 By now, I had fully reclaimed my time and embodied somatic healing, higher consciousness practices and plant medicines that accelerated my surrender and purging of:

The money scarcity was the hardest to purge because it's soooooo deeply intertwined with thousands of years of traumatic scarcity running through my Family of Origin DNA. It was also deeply enmeshed with the trauma from having been an over-shook "Money Tree" since 3 years old (the harder you shake the tree, the more money is supposed to fall out). When you're raised in a Chinese culture that has a one-child policy to cap over-population, there is ALWAYS not enough. The worst part are all the baby girls that got wrapped and dumped in the bottom of rivers because a boy was more valuable. Ugh.

And eventually, with all the inner work, I realized that money scarcity is not the core issue: a deeply, deeply, deeeeeeply wounded Unsafe Child is the core issue (9/10). I had my mind, heart and soul blown when I recognized how perpetually unsafe I've lived my ENTIRE life.

I AM A TUNING FORK

Phew, that was intense. Even going down memory line to share the behind-the-scenes of becoming feels intense. I'm not 100% sure how I even survived all that inner work... I just know that I didn't do it alone.

Every client or student I've ever guided, whether they were going through a divorce, unexpected health crisis, custody battle, or international relocation, has trusted my wisdom because I've literally lived through what they're about to go through.

Watch the testimonial videos and you'll see that they just knew that I am a tuning fork, who will recalibrate them back to their original glory. Imagine them as fine violins. Fine violins need to be re-tuned before every concert.

Are you about to embark on a quest of creative unleashing and lifestyle freedom? Are you finally ready to stop the frantic one-woman-show and upgrade to the podium of symphony conductor? Then join Unleash Your Freedom today!